Recent events have led Molly Paige, veteran radio news hosts who recently started at Alpha Media’s KXL Radio FM News 101 in Portland, to ring up Vonda Pelto, Ph.D., author of Without Remorse; The Story of the Woman Who Kept Los Angeles’ Serial Killers Alive, to bring some sense to a world going crazy with Muslim terrorism, convicted serial killers and general mayhem that leaves normal citizens scared and confused. Right after the horrible events in Orlando the call went out and Vonda was asked by an important question: “Is there a difference between the mind of a serial and a mass killer?” That interviews can be heard below from Vonda Pelto’s Sound Cloud Channel and it boils down to the fact that there is a big difference. The discussion also went into specific aspects of the Orlando story as they were known at the time, which was shortly after the event. 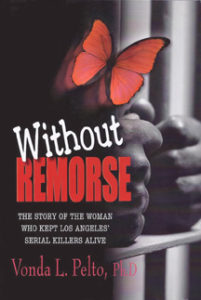 Previously Vonda, who spent three years, 1979-82, keeping some of the worst serial killers and criminals from harming themselves while awaiting trial at L.A. Men’s Central Jail, was interviewed by Molly Paige about convicted Grim Sleeper Killer, Lonnie Franklin, Jr., in Los Angeles. The plea for the death penalty from the prosecutor went like this: “I ask you to show the defendant the exact same mercy, the exact same compassion, that he showed his victims,” Deputy Dist. Atty. Beth Silverman said. “Because that’s what he deserves.” Franklin, 63, was convicted last month in the murders of nine women and a teenage girl in South Los Angeles. The first killing took place in 1985, and the last known death occurred in 2007. He also was convicted of attempted murder in an attack on a woman who survived.

Here is the interview with Vonda Pelto about the Grim Sleeper:

A man with jailhouse pallor, from lack of sunshine, stood talking on the phone. By many accounts, he could be called handsome, with good bone structure and the kind of thick, dark,

wavy hair you’d like to run your fingers through. He stood with one foot propped on the bench, half leaning onto the door frame of an office—an office I would be calling home for the next three years. The opening of the elevator doors had diverted his attention from the phone and he turned to stare at me. His green eyes sparkled as he perused my body, starting with my heels, black stockings, and up my soft black dress to my ample breasts and short red hair. He gave me a nod of approval and flashed a boyish smile.

I started to blush. It was flattering. My ego had been hurt sleeping with my first husband for over a year and not being desired by him. I craved male attention. My father was gone, working for the railroad, for long periods of time when I was little, and my brother, who was nine years older than me, left for the Navy the summer he finished high school. From then on, our house consisted of my mother and me.

The man on the phone caught my eye and we exchanged an intimate moment. I felt myself flush and my heartbeat speed up. He smiled. I smiled back. I took a deep breath, exhaled slowly, and relaxed a little. Why had I expected all of the inmates to look mean and surly? The tone of his voice was soft and caressing, and his laugh contagious as he replied to the person on the other end of the line.

He looked vaguely familiar, but I couldn’t remember where I had seen him. Maybe on the nightly news? I tapped the deputy on the shoulder as soon as we were out of earshot of the man on the phone.

“That man seems very pleasant. Who is he?” 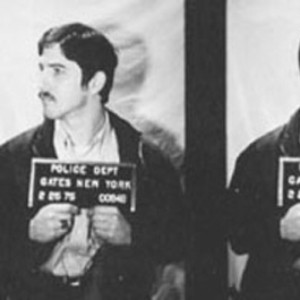 “That’s Ken Bianchi, one of the Hillside Stranglers. Would you like to hear what that ‘pleasant guy’ did, along with his cousin Angelo Buono?”

Before I had a chance to answer, Gonzales continued. “Together, they murdered ten young women and threw their bodies out along the hillsides in L.A.” The deputy stopped abruptly and turned to face me. I stopped short to keep from bumping into him and drew in my breath.

“I remember the murder of Kristina Weckler.” His voice full of rage. “She lived in the same apartment building as Bianchi over on Garfield here in L.A. Ken was always flirting with her, trying to get her to go out with him. She kept turning him down cold.  Who knows maybe she sensed something evil about him.  Well, shit, pissed Ken off, big time!

“One night he rang her doorbell, told her car had been hit in the parking lot. Said he was a reserve police officer could file a police report. Angelo Buono waited downstairs. When Ken

Ken, still talking on the phone laughing and gesturing with his Free hand, turned winked at me and flashed a seductive smile.  I froze.

“After Buono and Bianchi got their rocks off, they wanted to do some experimenting. Gonzales’s anger almost palpable. “Those two assholes injected Windex into Kristina’s neck and elbow; she went into convulsions. Unfortunately for her, she didn’t die right then.” The deputy clenched his teeth, attempting to hold his anger intact. The veins in his neck stood out like ropes and pulsated with each heartbeat. I edged toward the wall and rubbed my hand on the cold cement in a feeble effort to calm myself down.

One of her most surprising observations, at least to those unschooled in such people, is that “none of the serial killers I worked with exhibited any psychotic symptoms. I would classify them all as psychopaths, someone who is callous, devoid of empathy, lacks remorse or feelings of guilt.  Having the ultimate power over life and death made them feel strong and reduced their feelings of inadequacy.  I believe there is nothing a therapist, even Freud himself, could have done to stop these killers.  There are three indicators of sadism in children: cruelty to animals, wetting the bed into adolescence, and setting fires.”

Vonda confessed she could have easily fallen for the suave demeanor of Douglas Clark, who, with his girlfriend Carol Bundy, committed the brutal Sunset Strip Killings.  She observed that “most serial killers are white male, often clean-cut, and look like the boy next door. Don’t ever believe that you can pick out a killer or child molester by their looks. Even psychologists can’t do that.  I don’t believe serial killers or child molesters can be rehabilitated or that the death penalty is a deterrent to killers like these.  However, it does keep them from committing another murder.”

Vonda’s efforts to educate the public on the nature of serial killers has been a rough road as she relives again and again those memories.  She notes that many people suffer sexual and physical abuse and they don’t become killers, but “just like you were born with certain characteristics, I believe these killers are born that way. They lack a conscience or empathy for other human beings. There is something missing in their genetic makeup—that’s what allows them to torture and kill so easily. Bottom line, albeit perhaps a bit too simplistic: We need more research to improve our ability to spot serial or mass murderers at young ages.”
_______________________________________________________________________