Without Remorse: The Story of the Woman Who Kept Los Angeles’ Serial Killers Alive by Vonda Pelto, Ph.D., a Clinical Psychologist is a book which crawls into the minds of serial killers through the front door. In 1979, following the jailhouse suicide of Vernon Butts, an accomplice of vicious Freeway Killer William Bonin who raped and murdered young boys, psychologist in training Vonda Pelto was tasked with keeping the worst of the worst serial killers and hardened criminals alive and engaged while awaiting trial at Los Angeles Men’s Central Jail.

Her office was a converted cell, with Dutch doors always open, on the cell block with men like Bonin, Hillside Strangler Kenneth Bianchi, Sunset Strip Slayer Douglas Clark, famed porn star John Holmes and other notorious criminals. Vonda was always available to talk with anyone and the stories and discussions she witnessed and participated in took a toll on her physically, emotionally and psychologically. Vonda’s journey through Serial Killer Cuckooland caused her to increase the supposed stress relieving activities of increased alcohol consumption that also ushered in a promiscuous and dangerous lifestyle. She left after three years with her own sanity in tact but damaged, Vonda Pelto had changed. It might be akin to a combat soldier who survives but is never quite the same, with nightmares and sleeping with a revolver under the pillow. 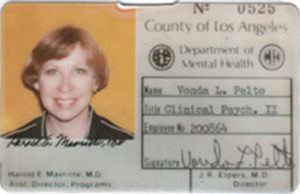 Here is proof: For twenty years, every time Vonda sat down to write this book the nightmares would return and she would have to quit. Finally, she slayed the demons and finished Without Remorse: The Story of the Woman Who Kept Los Angeles’ Serial Killers Alive so you can safely take the journey through Serial Killer Cuckooland.

Ever wonder what it is like getting up-close and personal with violent and notorious serial killers?

Ever sat around and had a bit of a chin-wag over coffee and donuts with a sexual predator who can’t stop himself from raping and murdering young boys?

Know anyone who kept a woman’s head in his freezer, with help from his girlfriend and accomplice, for sexual pleasure after raping and killing her?

Molly Paige of KXL FM News 101 in Portland interviewed Vonda Pelto, Ph.D. following the Orlando terrorist attack and the conviction of Lonnie Franklin, Jr., the Grim Sleeper Killer, in Los Angeles. Below is a Radio Show Video, edited by E.B. GO Vision Media, of the Orlando interview where the discussion goes into the difference between mass and serial killers and the role the media plays in their minds.